Calgary Imam Abdi Hersy, seen on the left in a Washington County Sheriff’s Office booking photo and on the right in a still image from a CBC interview, is wanted in the United States on outstanding criminal charges connected to two alleged sexual assaults. He was in court to appeal termination of his refugee status. (Woodbury Police Department/CBC) 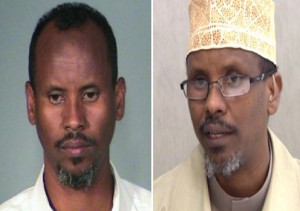 A high-profile Calgary imam appeared in federal appeal court on Tuesday morning to challenge a decision to strip him of his refugee status because of outstanding 2006 sexual assault charges in the United States.

The case has gone back and forth between the Immigration and Refugee Board and the federal appeal court. The board revoked Hersy’s protected status in Canada and he appealed.

Abdi Hersy was accused of sexually assaulting two female patients while he was working in 2006 as a respiratory therapist in Minnesota.

Raj Sharma, the lawyer for Abdi Hersy, essentially made the same arguments he’d made in previous court appearances. Sharma reiterated the allegations against Hersy are unproven and his client’s life would be at risk if he was deported back to Somalia.

The prosecution argues Hersy misrepresented himself, and did not try to deal with the charges until it became obvious that it would affect his refugee status in Canada.

Hersy lost his job and soon after his licence to practice in the U.S. once the reports surfaced. He then crossed the border into Canada, and was given protection as a Somalian refugee in 2008.

Federal Judge James Russell has not indicated when he will make his final decision. He could let the refugee board ruling stand or he could order yet another review.