Andrey Karlov was speaking at a photo exhibition event in the capital when he was shot by a Turkish off-duty policeman.

The gunman was a 22-year-old off-duty police officer who worked in the Turkish capital, Ankara’s mayor said.

After he shot the diplomat, the assailant let the guests out of the exhibition venue, according to local media reports.

Several media outlets reported that a gun fight ensued after Karlov was shot.

Local broadcaster NTV television said at least three people were wounded and were taken to the hospital.

A witness talking to Turkey’s CNNTurk television said that the attacker was acting alone.

“He (the attacker) said that I will not leave this place alive,” according to the witness.

The assailant talked about the situation in Aleppo after he shot the ambassador multiple times.

“Don’t forget Aleppo, don’t forget Syria,” the attacker said right after he shot down the ambassador, as seen on a video shared by Turkish media from the scene.

“Whoever took part in this cruelty will pay the price, one by one … Only death will take me from here,” the man said, while carrying a handgun.

Turkey’s state-owned Anadolu Agency said the attacker was killed by the security forces after a gun fight.

Turkey’s interior minister Suleyman Soylu has reached the location of the attack.

Diego Cupolo, a photojournalist in Ankara, told Al Jazeera that there were around a hundred armed soldiers in camouflage and police officers at the scene, along with armored vehicles.

Talks in Moscow about the future of Syria involving Russia, Iran and Turkey will go ahead on Tuesday despite the murder of Karlov, the Interfax news agency cited Leonid Slutsky, a senior parliamentarian, as saying. 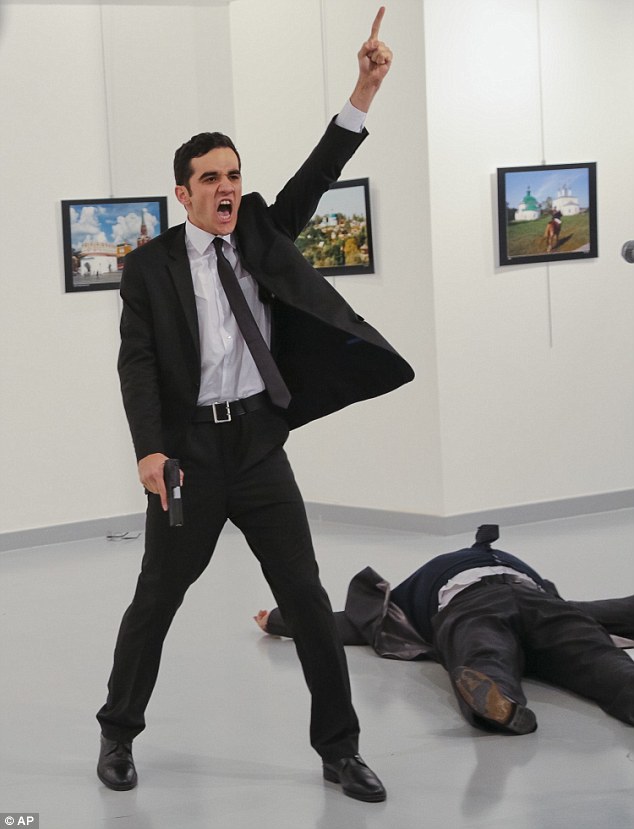 Turkey’s Anadolu Agency said the gunman (pictured) has been ‘neutralised’ 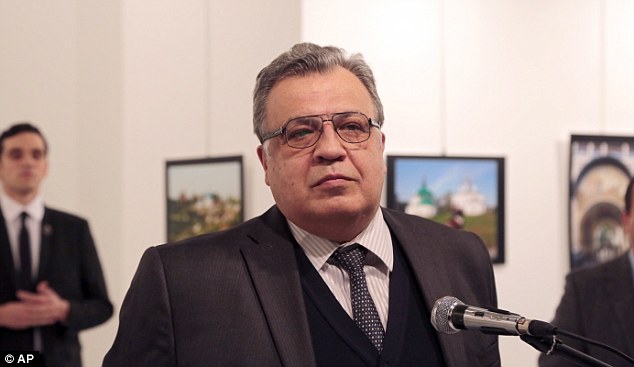 The gunman (left, in the background) was seen standing behind Russian Ambassador Andrey Karlov, 62, moments before he opened fire 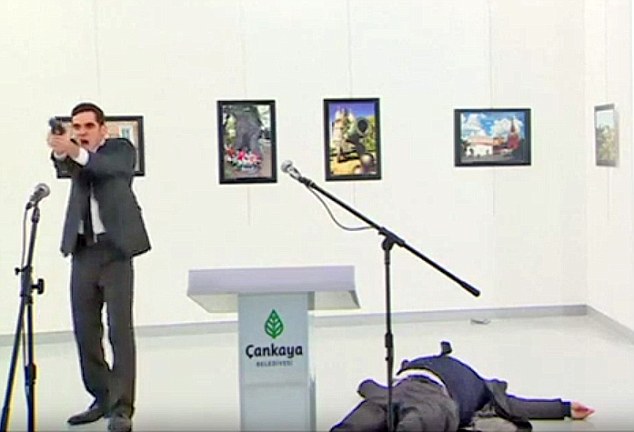 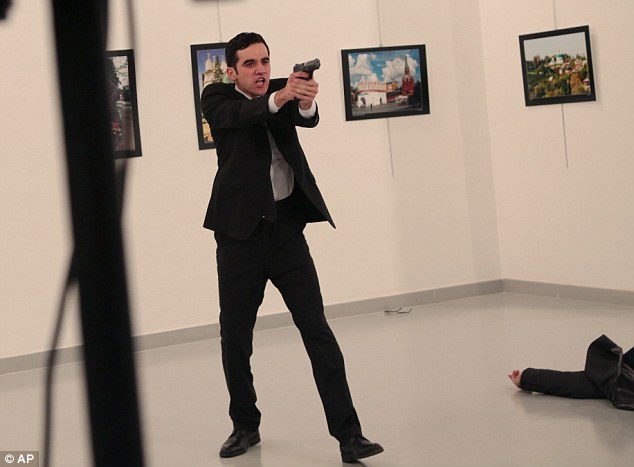 The gunman, who has not yet been identified, was seen brandishing a gun inside the gallery 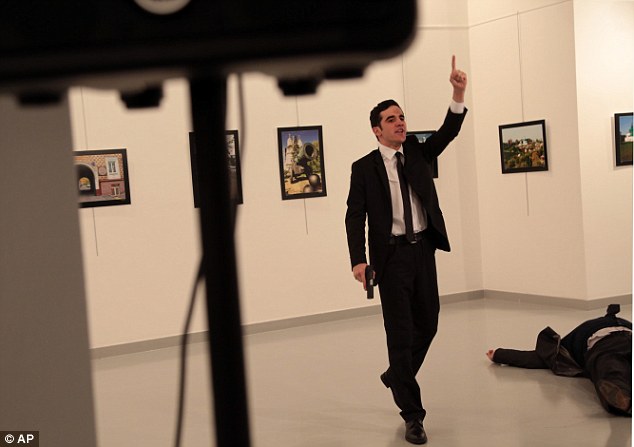 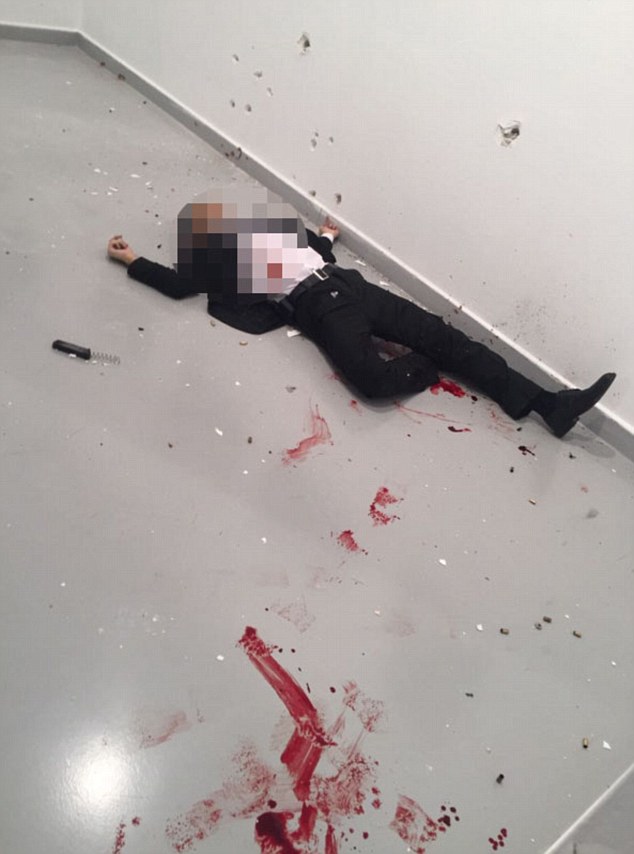 An image of the gunman, lying dead on the floor of the art gallery, was posted on Twitter

Mr Karlov was shot as he delivered a speech at the opening of an exhibition at the Ankara Center for Contemporary Art, near to the Russian embassy.

Altinas shouted in Turkish: ‘Don’t forget Aleppo! Don’t forget Syria!’ Before screaming: ‘Stand back! Stand back! Only death will take me out of here. Anyone who has a role in this oppression will die one by one.’

The horrific scene was caught on camera by journalists at the gallery to cover the event. 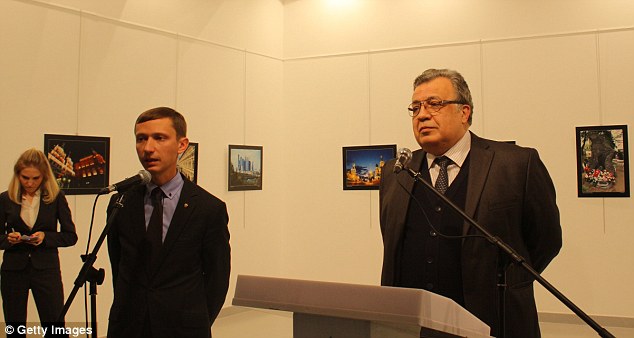 Mr Karlov (right) was about to give a speech at an art exhibition when the gunman burst in and began firing at him, shouting about the situation in Aleppo 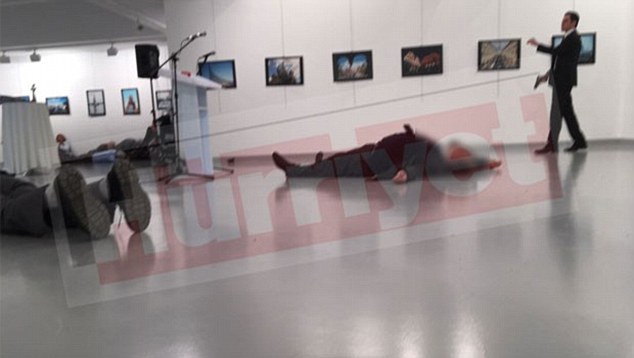